Principal Rick Flaherty; A Happy Ending and A New Beginning 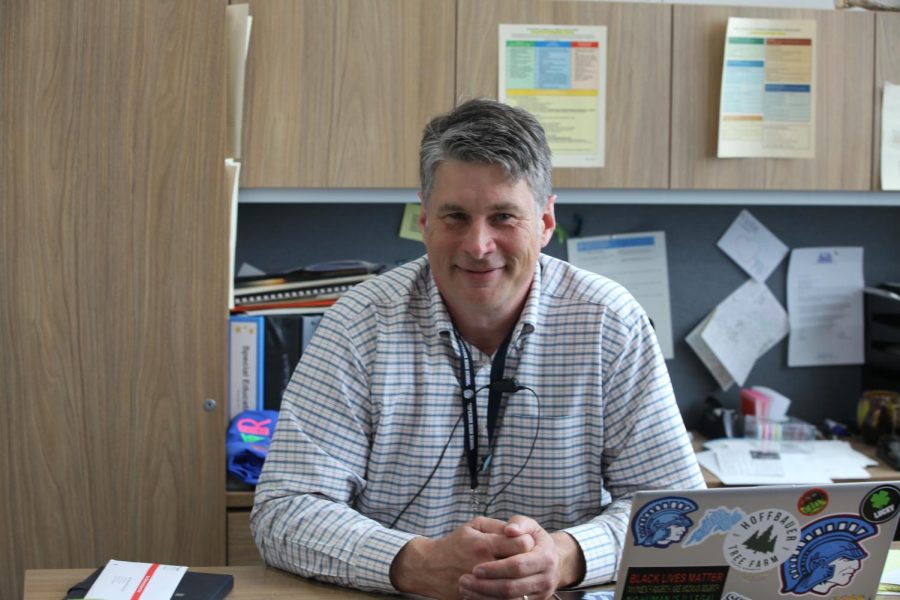 Rick Flaherty smiles for the camera

Flaherty has always been passionate about working with little kids.When asked about why he took the elementary school principal position, Flaherty said the job opportunity “just came up”.

Flaherty said “I started out as an elementary teacher way back in 1990. I am looking forward to going back and working with some younger kids”.

Flaherty said that he will miss the high school but this principal position allows him to work with kids and help kids learn something new. One thing that Flaherty is not worried about as he moves forward to another principal position is the improvements that he has seen in the school.

During Flaherty’s time as the principal of the high school he has stated that there is not one particular moment in his entire three years career that he can say was a memorable moment but one. That one moment would be how the school as well as him overcame the pandemic and worked through it to give kids an education.

Flaherty said “Working through the pandemic I think that’s the defining piece for me, for my last three years at Superior High School.”

Said by the students of the high school they have appreciated Flaherty’s time as the high school principal. Brynn Peterson [junior], Katelynn Tran [junior], Majesta Fleck [sophomores], Maddy Verdoljak [junior], Regan Miley [junior], Ava Denninger [junior],  when asked what has flaherty done over the past three years that has made the high school a great environment for students.

The students said that Flaherty made changes to the school that were beneficial toward the students of the high school. Changes such as adding clubs back into the school’s schedule.

During his three years as the principal of the high school Flaherty has made the high school a great learning environment for every kid. He has also made it a place where every student can feel accepted and heard. Not only has he done that but he has also encouraged people to pursue their dreams and aspirations, said by Brynn Peterson [junior], Katelynn Tran [junior], Majesta Fleck [sophomores], Maddy Verdoljak [junior], Regan Miley [junior], Ava Denninger [junior].

Flaherty said that he is focusing on finishing out the school year and not letting his soon to be new principal position let him lose his concentration from high school. As the summer approaches Flaherty will then transition to focusing on his Lake Superior Elementary School principal job.

Flaherty hopes that as he transitions to his new principal job that he works with the teacher and the staff to make Lake Superior Elementary School an even better learning environment for kids.

Flaherty said “I want to support all the good things that are going on and talk with the teachers and the team there about what some of their goals are moving forward.”

As Flaherty departs from the high school he states that he is very grateful to have worked with an amazing group of teachers and staff members. Not to mention grateful for all the amazing kids that he has seen grow up from middle school all the way to high school.

Flaherty said “I just very much appreciate having had the chance to work with all the teachers, the staff, and especially the students. I’ve loved being able to see kids grow up. I’ve seen a lot of kids; and I’ve seen tremendous growth and some really neat changes for students.”