Braiding a team together 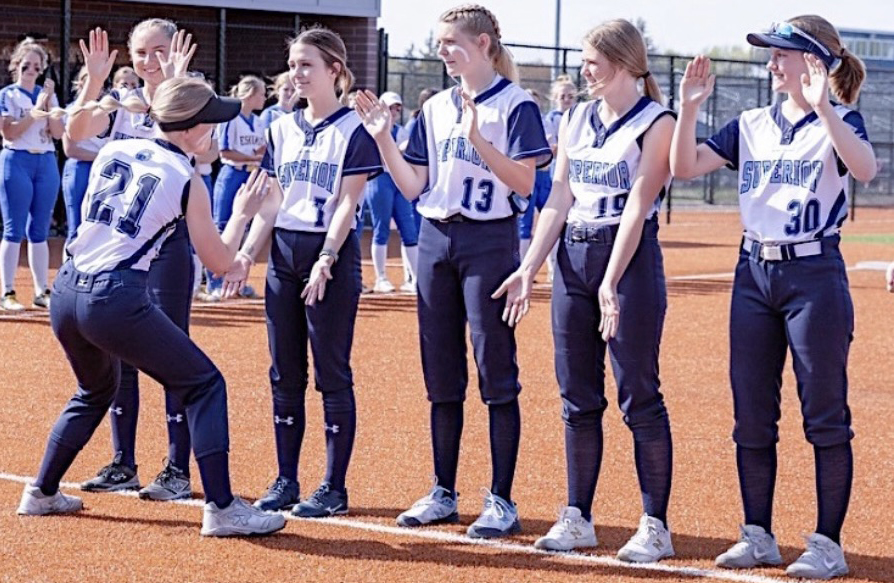 Hendry runs past her teammates, emphatically high fiving them before a game on May 18.

For the last ten years, senior Brooke Hendry has been fine-tuning her softball skills. Now, in the autumn season of her career in high school, Hendry is one of three senior co-captains for the softball team.

“Out of all the sports I’ve played I would say that softball means extra to me just because for so many years I spent so much time doing it. I’ve made so many close relationships with the other players, coaches, and even parents,” Hendry said.

Having played softball for so long, Hendry has especially been able to improve her outfield abilities. She’s played this position for the past six years, and has gotten quite good at it throughout highschool.

What stands out to the team even more than her skills on the field, though, is the way Hendry works with her teammates off the field.

“She is one of those players that hopes everybody on the team has success,” Coach Mike Sather said.

Sather describes Brooke as always being ready to help her teammates in whatever means necessary, and is a great example for the underclassmen on the team.

“She definitely leads by example. Will help all the younger players with team clean up duties and pre-practice preparation,” Sather said.

Hendry brought a sense of leadership and togetherness to the softball team. She spends her bus rides on away games braiding all of her teammate’s hair, meticulously giving each girl a slightly different style to sport on the field. Some styles one might see on the softball team are double dutch braids, french braids, fishtail, and side-rows.

“That’s my most important job, I literally braid everyone’s hair before every single game,” Hendry said.

Since middle school, Hendry has always loved to braid her friends’ hair, and found it to be a perfect way to help bond with her teammates on the softball team. Hendry gets one-on-one time with each of the girls, making it possible for her to have a connection with everyone on her team.

One of these students is sophomore and outfielder Avery Visger. She has been able to look up to Hendry this year as a strong leader and friend. Visger described how Hendry is a perfect team captain due to her work ethic and connections with the underclassmen.

“She is always the first person to go up to someone when they are down on themselves or having a bad inning. She goes up to them and with a big smile on her face and tells them shake that one off you got the next one. She is such a sweet and positive person that everybody loves to have her around,” Visger said.

Upon receiving her diploma this year, Hendry will be attending the University of Wisconsin-Madison. She plans to follow some kind of STEM-based career, but has yet to declare a major. Hendry looks forward to meeting new people and starting the next chapter of her academic career.