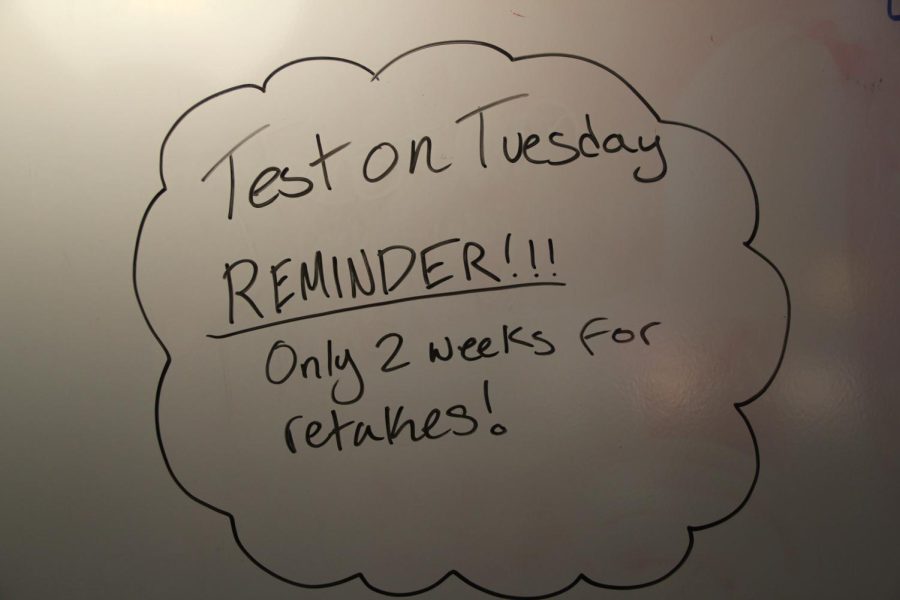 Students retakes have been limited to two weeks.

Getting to retake a test is always a relief. But now, the school board has implemented a change in the retake process. Instead of having until the end of the semester to finish it, there is now a deadline for retakes.

Students have now been given a two week time frame to retake a test. Some students have complained that it conflicts with standard based grading. While others like Junior Ben Flint have said it should be more personalized.  .

“I feel that the two week bases shouldn’t be in effect, it should be more per person bases. As lets say someone might have depression or bipolar, they might not have the energy to get up and do something within those two weeks. To actually get the grade up,” Flint said.

Of course it could still help students, Flint said that two weeks could be good for students, as the material would still be fresh in their brains. It also could be motivating having a timeframe, causing the students to do better on the retakes.

Instructional coaches Jason Kalin and Rebecca Troy worked on the change for weeks, taking recommendations throughout the year.

“It’s good for the teacher because what it’s doing is giving them a certain period of time, where they are focused on feedback from that particular assessment. It’s going to help the students, I think, in terms of managing their own time,” Kalin said.

Of course there are exceptions, such as if a student was sick. They could get an extension through communicating with their teacher.

Some teachers have already been giving extensions. Science Teacher Lee Sims gave his students an extension when they couldn’t come in during advisory time due to ACT test training.

Before COVID-19 Sims gave his students one week to do retakes. By the beginning of semester two he started giving his students two weeks, due to students struggling at the end of semester one. He believes that two weeks is more than enough time to retake tests.

This is still a new process and will continue to affect everyone as long as it’s in place. Only time will tell how the students and teachers will benefit from the change.