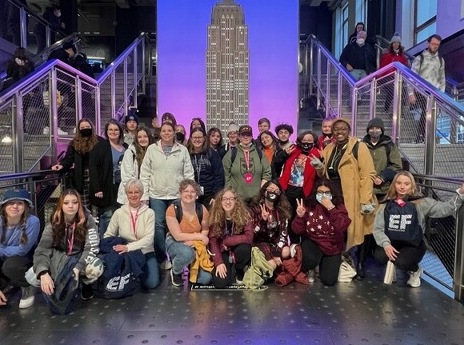 Students pose for a photo at the Empire State Building on the spring break trip March 12.

Freshmen and sophomores flew out of Duluth to explore Washington DC and New York City March 12. The trip was originally planned for eighth graders, but it was postponed twice due to covid. By the time the trip was rescheduled, the group was in highschool. This was transition coordinator Shawna Anderson first time coordinating the trip at Superior High School. The trip has always been at the middle school, but because of covid it was postponed. The trip may not occur again for a while due to how difficult traveling is currently.

“This is the last spring break trip,” Anderson said.

Anderson started spring break trips five years ago when she was teaching at the middle school and has been doing one every other year alternating with middle school teacher Sara Bianchet.

The trip originates from Anderson approaching administration with the idea of a trip that is not school sponsored. The trip is open to anyone who is able to pay for it, but there is no fundraising and the school is not held liable for anyone. Instead, the Education First tour company handles the arrangements, and insurance.

“I’ve been using the same company all my career. We promote the trip to all seventh grade students and teachers so they have time to plan and pay for it,” Anderson said.

The original two groups would have been about 50 people but only 21 people went on the trip due to covid.

“This year we got to go to the United Nations building, the museum of modern art, and an original debut on broadway: Paradise Square,” Anderson said.

“New York was super fun. There was a lot going on at all times, they call it the city that never sleeps for a reason,” Brill said.

Walking around Chinatown and little Italy with friends was her favorite part Brill stated.

“It was just fun being independent and walking around doing whatever,” Brill said.

“I liked going to the 9/11 memorial and seeing the sunset from the top of the Empire State Building was pretty cool,” Corton said.

“I loved the Lincoln Memorial. Everything there was marble and you could see the Washington Monument from there,” Corton said.

The morning they left for home it was raining but they still got to walk around Central Park, and go to the Metropolitan Museum of Art. When they got to the airport though their flight got delayed for four hours.

It got delayed again and the plane didn’t get into the air until 10:30 p.m. So, they missed the layover from Minneapolis to Duluth Minnesota. So Shawna got them a shuttle and they stayed the night in a hotel. They drove back the next morning.

“Right now with covid and all the problems it creates, it’s a lot of extra stress on top of getting everyone through the cities safely. I’m hoping someone will pick it up at the middle school,” Anderson said.