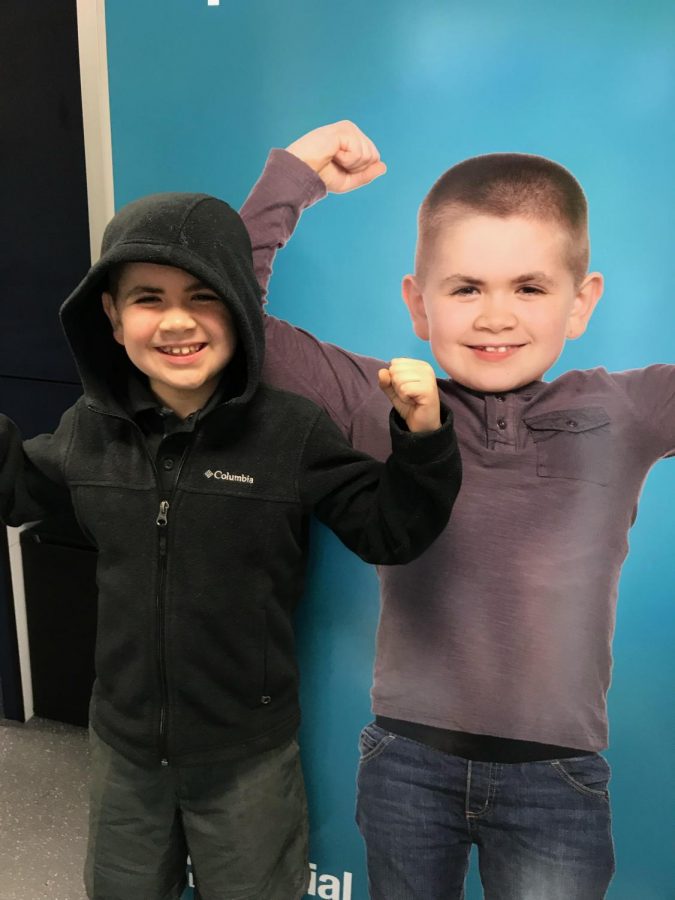 Jackson Beattie standing next to the picture of himself on the Memorial Blood Center bus. 30 students donated blood on Oct. 8 on the SHS campus.

The Memorial Blood Center (MBC) blood drive was recently hosted at the high school by the Future Business Leaders of America (FBLA) club on Oct. 8, 2021.

“This year is the most we have ever had, [relative] to our available slots,” FBLA advisor Donna Stubbe said.

The goal for this last blood drive was to get 30 students and staff, and a total of 36 signed up.

Of those that signed up, eight were deferred. Reasons for being deferred included having a low iron count in their blood, not having enough blood to donate and having difficulty with needles.

“It was rough for me because it was hard to find a vein in my arm, and I got lightheaded,” senior Brooke Hendry said.

In the end, Hendry was deferred because she didn’t have enough blood to donate.

“The reason why it is so important for people to donate blood is because there’s not any other sort of synthetic substitute for blood, and so many people need blood transfusions,” MBC Account Manager Katheryn Hamm said.

Hamm explains that, pre-pandemic, 53 high schools made up a total of 30% of the blood donated to MBC. The blood is sent to their lab in Duluth to get sorted into whole blood, red cells, platelets, and plasma. Then it is sent to St. Paul to be tested and subsequently dispersed to local hospitals around the area. In fact all of the blood from the local hospitals come from the MBC.

Senior Brooklyn Beattie has had a direct connection to the blood drive ever since her younger brother was born. Her brother, Jackson Beattie, has had two blood transfusions connected to the Memorial Blood Center. This inspired her to donate blood herself.

“[Jackson had a transfusion] at 20 months, when he had his kidney transplant, and one at three, when he had a platelet deficiency,” Brooklyn said. Being on the receiving end of two blood donations, Jackson’s image has made its way onto the blood drive bus.

“I have a rare blood type, O negative, which means my blood can be transfused to anyone with any blood type but I can only receive other O negative blood,” senior Ash Strong said. Knowing that his blood is so rare, Strong makes the decision to donate blood whenever he can.

Senior Astrid Zambori was inspired to donate blood because of their dad. When they were younger, they would go with their dad when he would donate blood. Now that Zambori is old enough to donate blood, they take the opportunity, saying that it feels patriotic to make periodic donations.

Individuals must be older than 17 years of age or over 16 with a parent/guardian’s signature to be eligible to sign up for the upcoming blood drives planned in the building this year.

The next blood drive is on Friday, Dec. 17. You can contact Donna Stubbe in room 2114 if you wish to donate.