First play of the theater season! 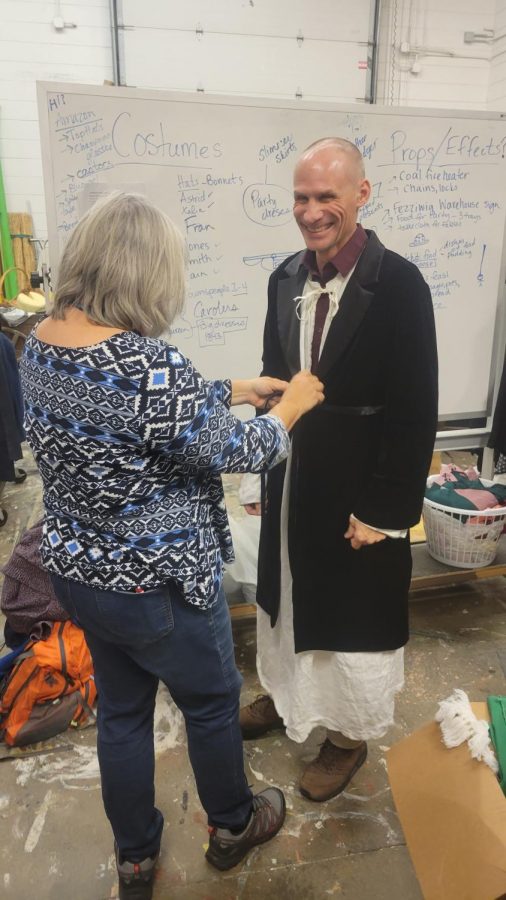 Andy Wolfe was putting on his Ebenezer Scrooge’s costume with the assistance of Tesarek on October 25.

The One Act group has started this year strong and jumping into the Christmas spirit. Director Amber Gilbert and co-director Cheri Tesarek chose to do the Christmas Story as the first play this year. This play has around 60 roles. Which has most people having two or three roles.

There will be no online stream or movie this year. Only live performances will be happening this year. Also they won’t be participating in competitions this year. The dates for the play are December second, third and fourth.

“We wanted to do a show that was recognizable,” Gilbert said.

Lead Andy Wolfe is Ebenezer Scrooge and the first teacher to have a lead role in a play. Wolfe was asked and encouraged to be Scrooge in the play this December. He has been a director in the past but first time having a role, also being directed. He had done a couple long calls with Gilbert about his role and if there are understudies. This is a team effort and Wolfe couldn’t do this without everyone else’s help. A couple students have helped by doing recordings of lines in scenes to help him memorize the lines.

“There is a personal reason for why I am doing this, because my son had played this part,” Wolfe said.

Co director Cheri Tesarek has done costumes every year since she became part of the theater club. More than 13 years has Tesarek been a part of One Act. Tesarek and Gilbert chose this story to make the audience feel good and uplifting. A period drama play hasn’t happened for a while. Gilbert brought up the idea of Wolfe being Scrooge. She agreed that Wolfe was a good fit for the role. Wolfe is very passionate about Christmas stories and has read Chafrles Dickens stories. 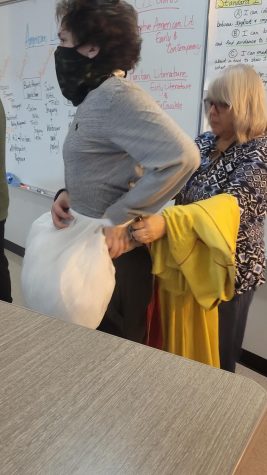 Co director Jacqueline Stumpf doesn’t have any roles and this is her first official time being a director. Stumpf does several things like helping with costumes, rehearsals and assisting Wolfe with his lines. Also fill in for anyone who can’t make it to rehearsal if necessary. There is a bit more leeway especially with no competitions according to Stumpf. She has been doing theater for all 4 years. Stumpf believes that Wolfe has a good voice for Scrooge.

“I think it was a good choice,” Stumpf said.

Fred, Scrooge’s Nephew and young adult Ebenezer Scrooge is played by junior Matthew Plesko. His voice was pleasant and fit for Fred. This is his first time doing theater and always had an interest in it. Junior Gwen Hall is Mrs. Crachit, the wife of Bob Crachit who is an underpaid employee of Scrooge. Also the Charwoman who is a crazy woman and she steals things from Scrooge after he dies.

“It’s so much better than being online,” Hall said.

Senior Brady Hansen only plays Bob Crachit, assistant to Scrooge. He lives at home with a wife and 5 children. He has been a part of the theater group for 2 years. He enjoys seeing the joy on people’s faces while performing. Doriah Ackman is a freshman but has completed acting in the past. Ackman is the Ghost of Christmas Present, along with Patrick the wife of Caroline. Ackman also enjoys the story behind the play.

“I think it’s smart to have that fitting theme,” Hansen said.

Make sure to buy your tickets for The Christmas Story this December, the first play this year. Also there will be auditions for Spongebob during the Spring of 2022.         School Play Video