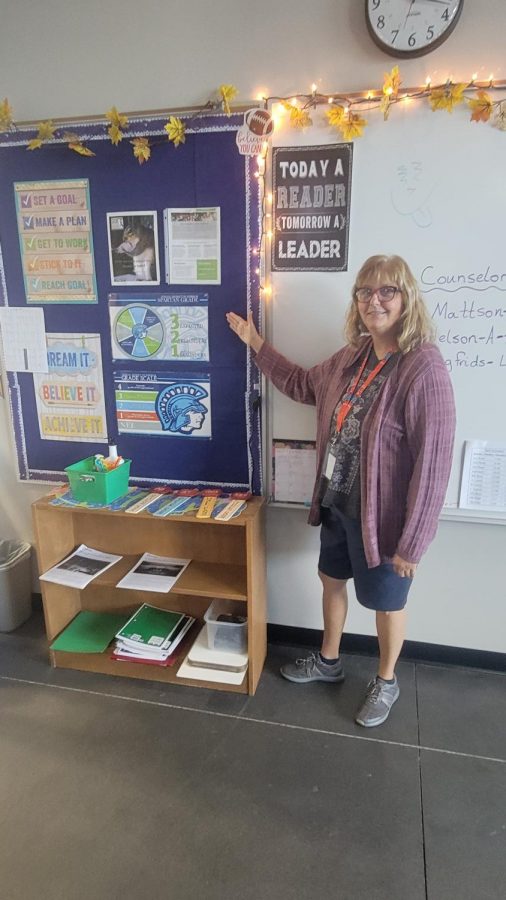 English teacher Karen Finstad explains Standards Based Grading to her students in room 2137 on Sept. 22. The new grading system has been explained by many teachers to clarify how it works.

Standards Based Grading is a new type of grading system that has been implemented across the Superior Middle and High Schools. Superintendent Amy Starzecki was involved in research on standards based grading in other school districts. Of the 39 teachers answering a survey sent out to them in September, 25 % said they believe that standards based grading is the best decision for the district.
At a faculty meeting early in the 2020-21 school year, it was announced that every teacher would switch to standards based grading in the 2021-22 school year.
The new system measures students on a scale of one to four, one meaning they need a lot of help and four meaning they are advanced. Students are measured on whether or not they understand the material, rather than a percentage of questions right or wrong.
“We aren’t the only folks doing this. I am really excited,” Starzecki says.
The process Starzecki and other administrators took to implement this system took around three years. Teachers started learning and doing research independently to further their transition in the first stage.
According to the Curriculum Instruction Director Crystal Hinztman, there are 15 other districts that use standards based grading, which the district studied before switching to it. The district had around 40 teachers test the system to see how it would go on a smaller scale.
In a survey conducted on standards based grading out of the 203 students who responded, 76% do not like this new grading system while 24% do enjoy it. A majority of negative responses related to how students didn’t understand it, or were very confused and thought it was unfair.
In a survey conducted with teachers on the new system, the results were very similar to the student survey. Seventy-five percent of respondents dislike standards based grading.
Many teachers who disliked the system mentioned how they felt there was no evidence of standards based grading having a positive effect. They also mentioned that the transition was too rushed and that students still don’t understand it.
Those who like the system say that more communication is happening and that parents and students are able to see the goals along with the teachers. Many feel that it is a logical and fair way to assess the assignments. They like how it focuses on student proficiency instead of work completion.
The second part of standards based grading is the Spartan Grade, which measures a student’s behavior in class. If a student’s spartan grade is below a two, the student will be unable to participate in sports and some extracurricular activities until the grade is back up. It may also affect whether that student can receive certain scholarships.
Math teacher Matthew Kampa says he enjoys the new grading system. Although he feels that there is a lot of extra work for teachers and skills need to be developed, it is beneficial for the school. He believes that the Spartan Grade is a positive part of the system, rewarding students who have good behavior.
“I believe that Standards Based Grading is appropriate for Math and English classes,” stated Kampa.