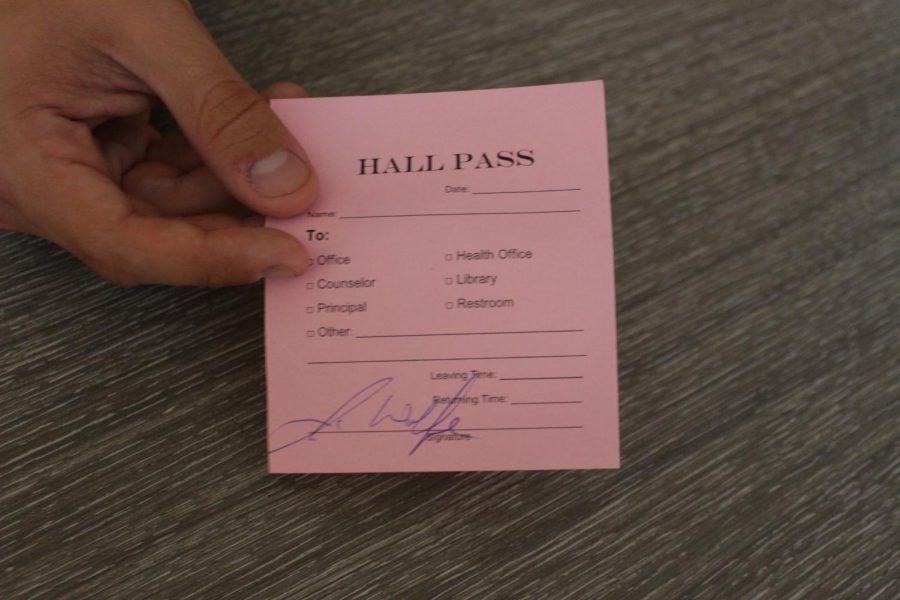 No longer will students be seen walking down the nine halls that comprise SHS with old, unusual hall passes like driftwood, a CD, or a lanyard. “I don’t want to see a kid walking around with a rubber chicken,” Dean of Students Bryan Denninger says.

The hall pass policy began on Sept. 1, the first day of the new school year, to allow administrators to easily keep track of students who are in the halls unattended. A pink hall pass has always been at Superior, but they have overseen a change since being reinforced.

The pass is now measured at 3.25 inches by 4.50 inches, instead of the traditional pink pass that measured 3 inches by 5 inches. They also are easier for teachers to fill out with checkboxes, rather than having to write out the exact location of where the student is going. Principal Rick Flaherty explained that the new passes will help keep structure and order to the classes while making every student accounted for if an emergency were to occur.

Flaherty explained that teachers are frustrated because writing the passes wastes time. But looking at administrative data that is currently being conducted, administrative staff currently believe there will be a higher increase rate of students in class during the class period instead of roaming the halls.

Junior Abigail Gavin likes the new pass system because she feels it is more sanitary than the old pass system.

“I kinda felt gross touching them [the traditional “item” passes] because people went to the bathroom with them and just put them back. Some of them were sticky,” said Gavin.

Gavin also likes the passes because it helps actually show where students are located in the building and it gives teachers their own identity while writing the hall pass.

However, Gavin says, “I like the signature pass because I think it’s artistically inclined. It gives teachers their own unique little style.”

Junior Charles Shaul thinks the passes do not make a difference and he is fine with what way the administrators went forward with the decision. He believes that if a teacher does not use a pass, and one of the students is stopped in the hall, the teacher should begin to use the pass.

The hall pass is still in the early stages of being enforced, however, the administrators believe that over time it will become a more efficient way of keeping track of students in the school,