Predicting the Future With Net-Ionic Equations 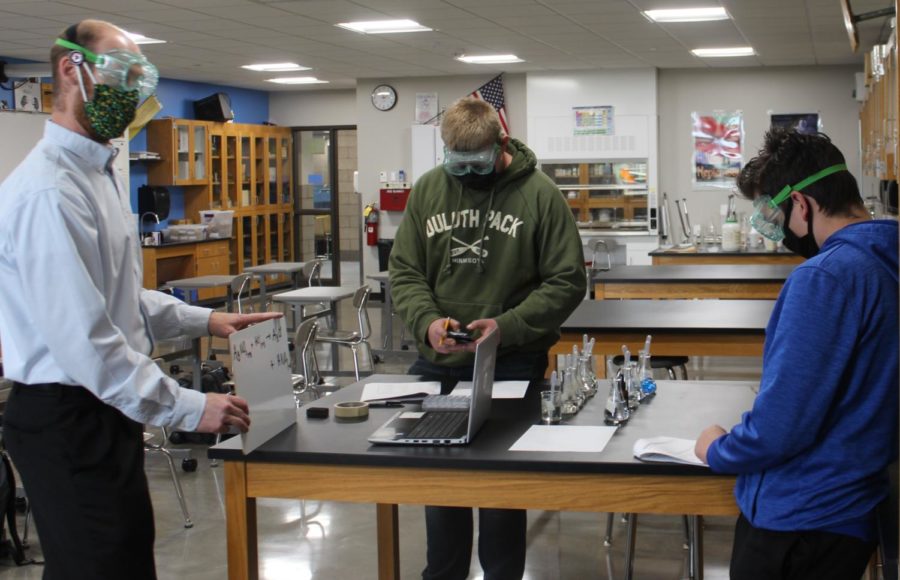 Tyler Ross explains an equation to an online student at the lab station in room 1150 while Trevor Bickford and Cameron Buck start the experiment May 4.

Chemistry teacher Tyler Ross’s 11th-grade class in room 1150 was in the middle of the solubility unit as of Thursday, April 29. Solubility is the maximum amount of a substance that can be dissolved in a solvent. Ross’s students did an experiment called the “net-ionic equations lab,” which put their knowledge about solubility to use.

Ross’s teaching style includes hands-on learning, which is why his students do labs to go along with each unit they are learning about. The combination of thinking skills combined with hands-on learning is what originally got Ross interested in teaching chemistry.

The labs help students learn when they do an experiment and are able to fully engage with the subject. His teaching style also includes using metaphors to help his students better understand chemistry vocabulary. Ross used billiard balls on a pool table to explain and help students visualize kinetic molecular theory.

“You can relate it to something that’s more real life, that kind of helps build a mental model,” Ross said.  “So to try and take complex things and have a more simple example to help build that up.”

“I do really like how hands-on the class is. I tend to be a more hands-on learner, I tend to just understand things better once I actually do it rather than seeing and talking about it. So, definitely all of the labs help,” junior Trevor Bickford said.

This net-ionic equations lab uses a large number of chemicals, 13 different solutions; metals, salts, acids, and bases. Before doing any kind of lab with chemicals, it is extremely important to follow safety precautions to prevent serious harm.

The procedure was to first, on a clean spot plate, drop 4-5 drops of each of the two reactants into one spot on the spot plate. Next, to observe if the solution turns cloudy. If it did, that meant a reaction occurred. Finally, recording the observations. If a reaction occurred, they would inspect what color it turned and write it down. If there was no reaction, they’d simply write “no reaction” on their recording sheet. This lab resulted in important knowledge for students.

“It’s amazing to see the colors change when you mix the chemicals together,” junior Lizzie Pearson said.

“They can use these solubilities to predict, no matter what two things they mix together, they know what will happen next,” Ross said.

Online students have slightly different jobs when it comes to labs. Since they cannot physically participate in labs, they observe the in-person students doing the lab over a Google meeting. Then the at-home learners build the graphs, crunch the numbers, solve the problems and collect the data with the help of the students doing the experiment in person.

Now as for the hypothesis, which is an educated way of predicting the future in science. Students had a table for the lab that listed what types of chemicals did not dissolve in water. When they looked at two chemicals that they were going to mix, they could see what new chemicals would be made. Then, they checked the list to see if any of the new chemicals would not dissolve in water. If one or more of the products was not water-soluble, they could predict whether or not they would see a solid form when the reaction happened.

“It isn’t nearly as fun as predicting a future like who will win sports games or lottery ticket numbers, but it is incredibly useful for scientists when you only get one shot at something, like landing on Mars, or trying to save somebody’s life with medicine,” Ross said.