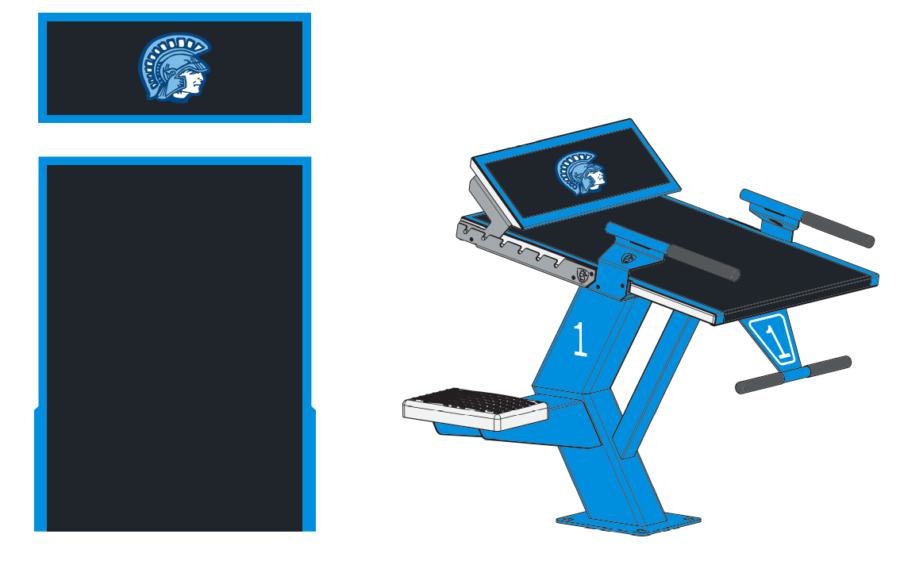 Bill Punyko's diagram of the new starting blocks that will be installed by August of 2021 for the beginning of swimming season. Punkyo has been awaiting this upgrade for months and is very excited.

With the constant reconstruction of starting blocks, which are over 20 years old, they must be upgraded. Now this upgrade isn’t free, rather it will set back the high school $32,000 for just modern starting blocks alone. Installation fees have not been set in stone due to lack of installers to get the job done.

One major improvement that will come from new starting blocks is adding a chalk, a place to brace your back foot, to the back side of the starting block.

“Swimmers have to put towels on the current starting block to add traction. The new blocks will have a lot more traction and give swimmers more launch from the start of the race,” Punyko said.

The new starting blocks will also have handles coming off the edges of the starting block so swimmers can remain stable while entering their diving position. Blocks with similar features are found in competing schools and give opposing school swimmers an advantage in ability to practice more efficiently.

“With the new blocks, we will be able to open up many new techniques like performing a step up on the step connected to the block,” Puynko said.

Along with the platform of the block being upgraded, the base of the new starting blocks will be about two inches wider and longer. The new blocks will be made out of steel and powder coated blue. The current blocks are just stainless steel.

Along with new starting blocks, Punkyo would also like to install a new baffling system which is pads that hang from the ceiling, so the sound in the pool area is more controlled and crisp.

This upgrade is not solely funded by the high school. Sponsors have donated thousands of dollars. Sponsors  will be recognised by getting their name and the amount they donated put up on the wall below the observing balcony in the pool area.

One sponsor that is greatly recognized by Punyko is Liz Petroske, who has donated 20,000 dollars to the swim team. The money is being put towards the new starting blocks.

“The pool isn’t just for the school; it’s for the community,” Punkyo said.

Once the new blocks are in, the high school and YMCA swimmers can throw away the towels that are used for traction, and enjoy a modern day launch into the chilly diving pool.