The possibility of changing the name of Moccasin Mike Road has led to a lot of debate. 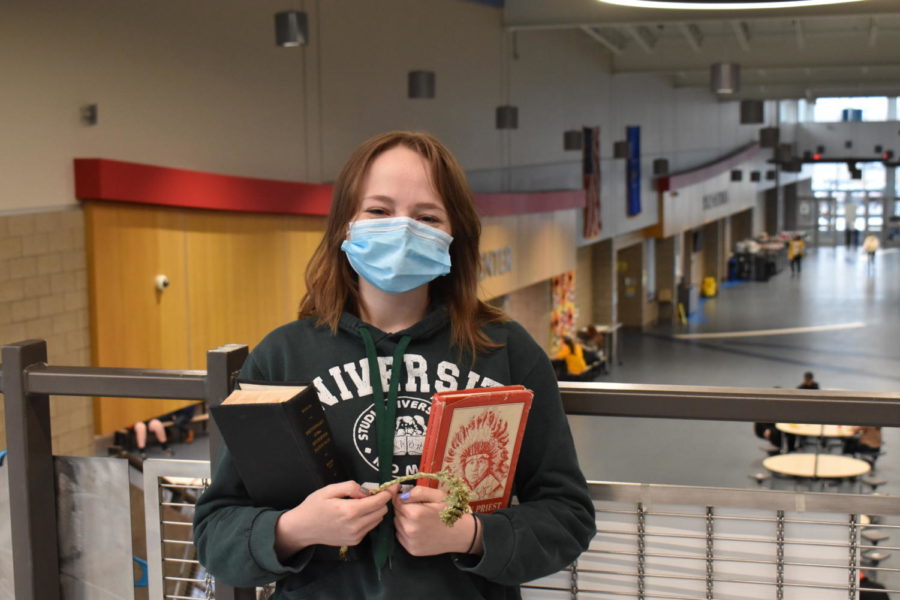 Senior Suzie Warring is holding an Otchibwe dictionary as well as another Native American priest book at SHS.

After some people disturbed sacred burial grounds on Wisconsin Point during the 2021 Midwest Communication’s Winterfest Medallion Hunt, there have been more serious conversations among city officials regarding changing the name of the road leading out to the point to reflect the history and culture of the indigenous people who originally lived there.

Superior’s Mayor Jim Paine discussed the idea of changing the name of Moccasin Mike road early in 2021 at a Commission on Communities of Color meeting.

“What seems to be true is that his name was Michael Bright. He was a part of a family of Bright’s, a couple who shared his name, his father and his son. He also seemed to be related to United States Senator Jesse Bright, who was a Senator from Indiana,” said Paine.

According to Paine, Jesse Bright was very close with US Senator Steven Douglas from Illinois. Douglas was one of the architects of some laws that allowed settlement of the west and he and Jessie Bright and a few others founded white American settlement in Superior.

Superior City Counselor Jenny VanSickle, Tlingit/Athabascan, Sheet’ka Kwaan kiks.àdi Gagaan Hìt, is the only city counselor of color and has disagreed with the name of the road long before there was ever talk about changing it.

“Included in that resolution were a set of clauses that would guide policy decisions moving forward. One of the chief tenets of that resolution is language preservation. So, at the core of Moccasin Mike, is the need to recognize and use indigenous language in a more visible and positive way,” VanSickle said.

According to Mayor Paine, there is no real evidence that Moccasin Mike Road is the real name for the road leading to Wisconsin Point, and it has had a half a dozen other names such as Schaeffer Road, Lake Shore Drive, parts of it are still named Coolidge.

The purpose of the name change is less about who Moccasin Mike was, and more about who the Ojibwe people are, education, respect, and tradition moving forward.

“Chief Osage’s descendants still live very close to Superior, and they were forced off that land. So, when it comes to native people, it is often thought that they are on reservations only, or they existed a long time ago and I think a lot of people would be really surprised to find out how diverse their high schools are, and their teams are. Young kids have a hard time grappling with being different. People are discriminated against or they are too ashamed and do not know how to express their culture. Normalizing their language and prioritizing Ojibwe language in all of our decisions is paramount and extremely important,” said VanSickle.

Some people have been opposed to the idea of the name change and simply think that there are more important things to worry about than this.

“I think the name should remain. Personally, I think it is a cool name. I have been living in Superior for 21 years and going to the Point on a regular basis. I think the name is iconic for that area and goes well with the Native American burial located there. I’m not sure what’s the reason for wanting to change the name, but I will say there are other important issues related to Wisconsin Point,” said spanish teacher, Doris Waletzko.

VanSickle said that some of her colleagues have made fun of the idea. She believes that it is because this conversation started around the same time that Mr. Potato head was canceled, and Dr. Seuss was being censored; it looked like she was trying to pile on to a national movement

“Unless it was your very own ancestors whose graves were dug up by several construction sites in the 1910s and dumped onto the banks of the Nemadji and were left to rot over time, one cannot consider those who want to change Moccasin Mike Road to a more respectable name to be ‘too sensitive,” said senior, Suzie Warring whos addamitt about the Ojibwe language.

Changing the name of Moccasin Mike Road is still just a conversation. According to Mayor Paine, it will take several conversations over a long period of time to educate the community, come to a decision on what the new name should be, and to officially change the name.

VanSickle said, “I hope that it inspires a lot of native centered work which is much larger than just naming. Its education, visibility, art, celebration, music, food; all of that is missing from Superior and I hope this supports native visibility and language preservation in a positive way.”