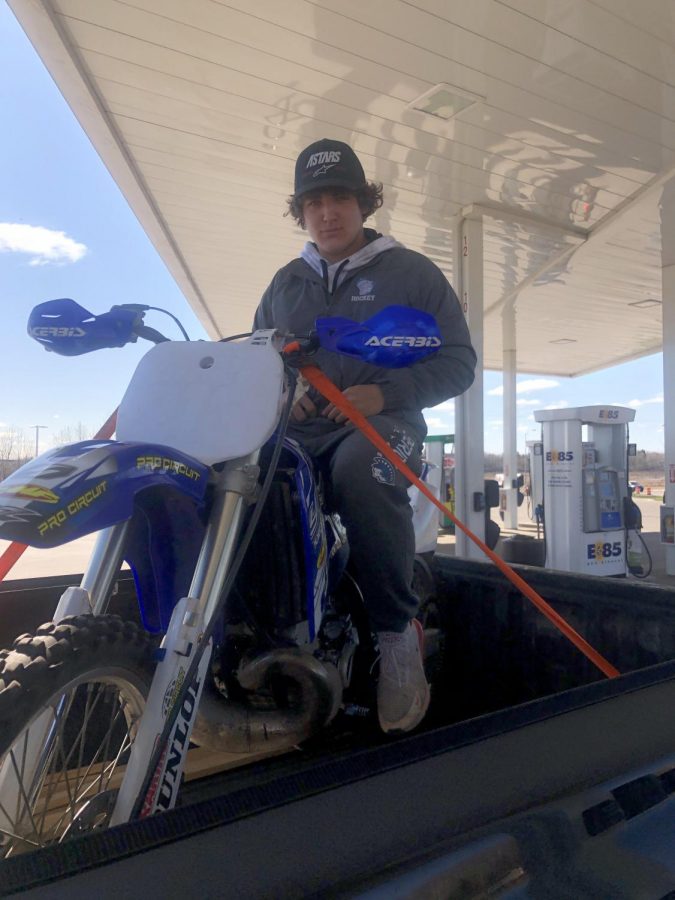 Sophomore Austin Ward sits on his Yamaha Yz250 in the back of a truck May 8. He needed to gas up the bike in city limits, but the law does not allow driving it in the city limits.

Sure, some people believe that it is a disturbance and they should not be allowed in town. And to some degree, they’re right: the tires are built for off-road use, so riding your off highway vehicle on paved roads will quickly wear the tires down. Old tires wear worn down paved roads.

However, the benefit of buying new tires could give some businesses an economic boost.

According to the Yamaha owners manuals they state that owners should “never operate an ATV on any public streets, roads, or highways.”

Austin Ward currently owns a Yamaha Yz250 and goes for rides almost every weekend. Every time he goes for a ride he has to fill his Yz250 with gasoline before he leaves, and he still has to bring a spare tank of gas with him because it has a small tank and burns through gas fast.

“I spend at least $40 worth of premium 91 octane gas almost every ride,” Ward said.

But what if Ward were allowed to come into town to gas up? One of the main benefits of allowing off highway vehicles in town is it can boost the economy because they will use the roads to go out for dinner, visit parts stores, and fill up at gas stations.

Allowing off highway vehicles in town can also help people who don’t have cars or their license, it would allow them to get from their house to work. There are courses online that you can take for a small fee to have a license for one of these machines.

Sophomore Emily Berka lives in South Range, and she can’t drive from her house to work because her driver’s test was pushed back this spring.

“If they opened up Superior roads to off highway vehicles, I could drive from my house to work every day,” Emily Berka said.