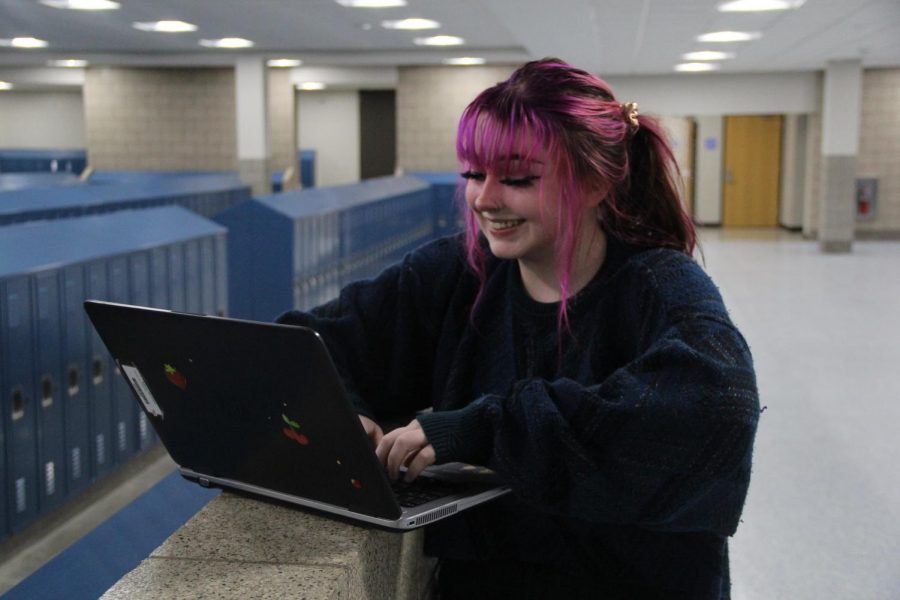 Junior Emma Bradley stands by the locker bay looking at her comments on her latest Youtube video. Since Bradley first started her youtube channel in July of 2018, she has gained 103,000 subscribers in the past two years.

Junior Emma Bradley has reached an astounding 108,000 subscribers on Youtube, where her channel, h0echub, is focused around makeup-related content. She has received over 2.5 million total views among her 11 videos.

“There’s no meaning behind it, I just thought it was funny,” Bradley said.

Bradley likes the Youtube platform for connecting with people that enjoy similar makeup and styles as her. She also enjoys being able to express herself through her videos and loves getting ideas from people that she often then tries in ensuing Youtube videos.

“Even though it doesn’t really bother me that much, hate and negativity I get on my content does affect me and sometimes makes me not want to post. I used to care a lot about it before, but it just doesn’t bother me as much anymore,” Bradley said.

Bradley plans on posting more on her channel in the future. However she is often caught up with school and finding content that she thinks is fresh and something to be proud of.

Bradley’s Youtube channel started getting real attention online when she posted a video called, “Aesthetic Peachy Makeup.” She said it’s “embarrassing,” but it was her first video to reach 1,000 views, and then it also hit 10,000 views only a day after it hit 1,000.

“I was pretty excited,” Bradley said in regards to the staggering number of views.

She said one effect of the channel’s popularity has allowed her to become more social.