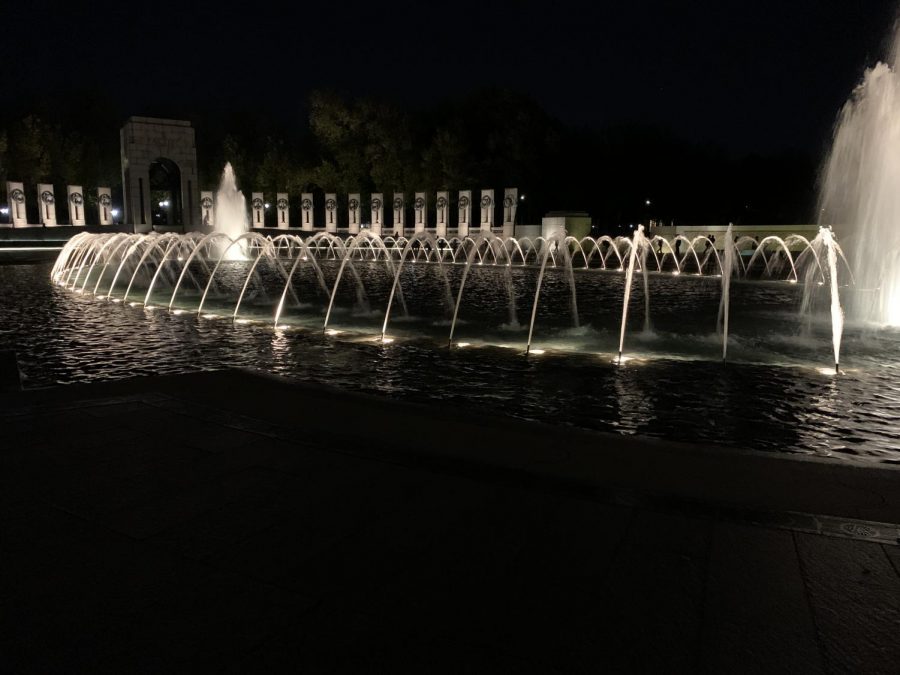 The WWII Monument on the mall in Washington, D.C., as seen by SHS journalism students Nov. 21. The students visited D.C. to attend NSPA and JEA national fall journalism convention.

Either enrolled in Yearbook or Spartan Spin, 16 students went to tour D.C. while learning how they could improve their journalism skills.

The students got to wake up and get a tour of our very own U.S Capitol they day after they arrived, Thursday, Nov. 21. But to get there, they had to figure out how to use the metro, DC’s subway system. For many of the student’s, it was their first time using public transportation, especially an urban rail system, and they didn’t expect it to be so quick. The group even got split up because the doors ended up shutting before about a third of the students could get on.

“I remember the look of fear in the student’s eyes as the train pulled away,” yearbook and newspaper advisor Christa Kalin said.

Once they arrived at the capitol they got a tour from a pretty funny guy. During the tour, he delivered multiple puns about the capitol and its history, including a threat of “capitol punishment” if they broke any of the tour rules. The students even saw the impeachment as it was going on in the capitol, or what they could see through all the cameras recording the event.

“I liked the tour of the capitol because it was cool to see all of the news stations outside the room while the impeachment was going on,” yearbook student Emma Sislo said.

After the tour the students were hungry, but the only thing within a mile were two food trucks. As they were approaching the food trucks one pulled away. The students chased the food truck down till it finally came to a stop a block away.

Students didn’t just go to see all the monuments, they also had a journalism conference that consisted of multiple different classes. Students got to choose what classes they wanted to go to, but they had to get there quick as most of them would fill up quickly. When students missed out on the classes they had two options: going to another session or the Journalism Fair down on the bottom floor of the convention center. There they found multiple colleges, and all of them were there to teach you about journalism opportunities. Along with the colleges, there were also design companies such as SNO and Jostens.

“I liked how there were so many colleges there that you could talk to and get merchandise,” Spartan Spin student Kennedy Flowers said.

Saturday afternoon, the final full day of the trip, the students went to a Washington Capitols vs. Vancouver Canucks hockey game. Before the game, they got food and checked out the Capitol’s store.

The game ended roughly for the Capitols as they lost 1-2 to the Cunucks in a shootout.

“For seeing a hockey game for the first time, it was amazing to see a shootout because they are so rare in hockey,” Spartan Spin student Dale Summerfeild Jr. said.

After the hockey game, it was a rainy night so they decided to go to the National Portrait Museum and view all the presidents’ portraits and other American art pieces.

When asked about traveling with students for the first time chaperone and business teacher Tara Hansen responded, “It was easier than I expected, the students were super respectful and go-with-the-flow, which made my job much easier.”

The next trip put on by the NSPA Will be held in Orlando, Florida, and that the adviors have yet to determine if Spartan Spin and yearbook students will be traveling to it next year.