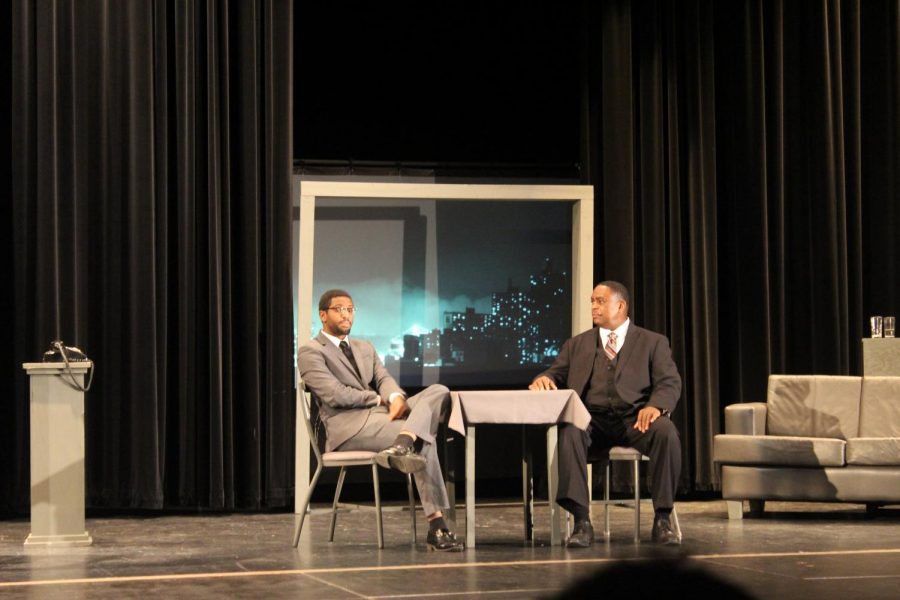 (From left) Actor Julian Williams (Malcolm X) and Carl Crawford (Dr. Martin Luther King Jr.) sit across from each other at a table in their “high rise apartment”, conversing about their daily lives and its issues during the play “The Meeting”.

Actors from the Renegade Theatre in Duluth, Minnesota, came to the school to perform “The Meeting” in the performing arts center Nov. 5. There were three actors in the play: Julian Williams who played Malcom X, Carl Crawford who played Dr. Martin Luther King, and Gabe Mayfield who played Rashad.

Over 220 students attended the play.

“The way the actors used their words was very creative. The whole idea of racism is a touchy subject and they did a nice job,” Junior Chance Burgess said.

The play features a fictional meeting between Malcolm X and Dr. Martin Luther King Jr., both human and racial rights activists. They met in a hotel room in Harlem and discussed prejudice and ways they can solve it.

“You can make a stand just by sitting down,” Malcom X said.

Malcolm and King come to the conclusion that whether or not either of their philosophies were correct, what mattered is that they work together. Though the play and it’s timing is fictional, they were both assassinated shortly after the meeting

The idea to bring the play to SHS started when theater teacher Amber Gilbert saw the play. It was closely connected to the American Literature curriculum (an option for a junior year language arts credit). Gilbert began talking to the associates of Renegade a month and a half before the play, asking about reduced tickets.

“Because of grants and sponsors of the play, we were able to get the tickets for free, as well as other high schools,” Gilbert said. “I wanted the play to help connect kids to the civil rights movement and think about our society. The discussion of the topic is important.”

The actors that were in the play gave their thoughts on how the play relates to everyday life.