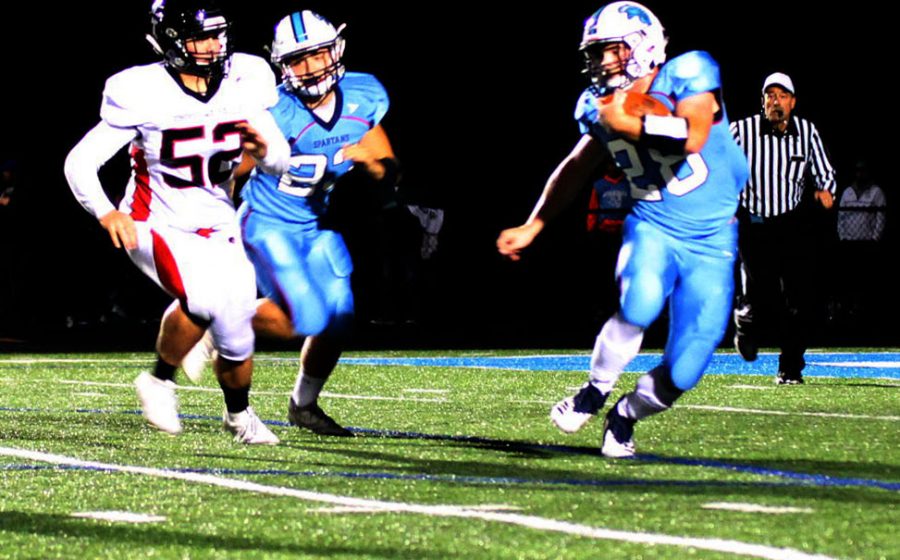 Junior Carter Fonger rushes with the football during Friday night’s Homecoming game in a 36-14 victory over Chippewa Falls.

The Spartans faced the Chippewa Falls Cardinals in their homecoming game Friday night at the NBC Sports Complex, winning 36-14 with two touchdowns from senior Caden Stone and three from junior Carter Fonger

Superior scored first with senior Brennan Morrissey’s 20-yard TD run with 6:21 left in the first quarter. Superior would add on with 2:16 to go in the first with a 21-yard touchdown pass from Junior Kaiden Kimmes to Fonger, extending the lead to 14-0.

The second half was dominated by Superior. Fonger rushed for a touchdown at 7:47 in the 3rd quarter. The Spartans then decided to go for a two-point conversion as Kimmes threw to Fonger for the 2-point conversion giving Superior a 22-7 lead.

Stone then rushed for two touchdowns in the 3rd and 4th quarters, extending Superior’s lead to 36-7.

Superior’s defense turned the lights out as they put pressure on Cardinals’ quarterback Hayden Goodman and shut down their run game.

On a Cardinal drive in the 3rd quarter, Superior sacked quarterback Goodman for a loss of eight yards, stopping them from scoring and leaving them at 3rd and 40.

“Going into the game all we wanted to do was win. It was on our mind all week and our hard work of the practice was shown in the game,” Kimmes said.

The Cardinals scored with running back Ben Steinmetz on a passing play and a rushing play.

Superior is now 5-1 and in a competitive position to win the Big Rivers Conference. Next Friday night, Oct. 4, the Spartans will face off against the Menomonie Mustangs (undefeated) in another conference matchup.